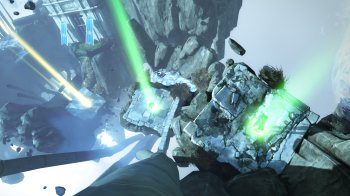 Dunwall City Trials, the first DLC release for Dishonored, is just a couple weeks away.

If you've got a hankering for more Dishonored, then the news I bear is good - as long as you weren't hoping for the further adventures of Corvo. Dunwall City Trials is a collection of ten "challenge maps" that will require you to employ weapons, gadgets and supernatural skills to gank guards, take down Tallboys, wipe out weepers and even rampage through non-stop runs of drop assassinations. You'll shoot down tanks of whale oil dropping from the sky and skulk about a fancy mansion, stealing everything that's not nailed down. The expansion will include new achievements and DLCs, plus a global leaderboard that will tell you just how bad at the game you really are.

The DLC is clearly aimed at players who enjoyed the more action-packed parts of Dishonored - stabbing guys, blowing stuff up, that sort of thing - rather than those who found the story, setting and characters more appealing. Fortunately, two story-based DLC releases are planned for 2013, one featuring the assassin Daud and the other that's still a deep, dark secret.

Dishonored: Dunwall City Trials comes out on December 11 for the Xbox 360, PlayStation 3 and PC, and will sell for $4.99 or 400 Microsoft points.