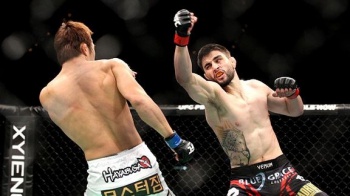 A digital tattoo on Carlos Condit's midriff in UFC Undisputed 3 has sparked a lawsuit against THQ.

When dealing with copyright infringement, it's worth noting that the outright copying of an entire game isn't required to attract lawsuits. Sometimes, the accidental misuse of art assets is enough to get the ball rolling, as THQ recently discovered. Arizona-based tattoo artist Chris Escobedo is claiming that an "exact replica" of his work, a tattoo of a lion specifically, appears on the digital likeness of Carlos Condit in THQ's UFC Undisputed 3. Since the tattoo is prominently displayed on Condit's midriff, Escobedo is asking the courts for all profits associated with the tattoo's use as well as damages.

"People often believe that they own the images that are tattooed on them by tattoo artists," Condit's lawyer stated. "In reality, the owner of the tattoo artwork is the creator of the work, unless there is a written assignment of the copyright in the tattoo art."

It's reasonable to assume that if copyright infringement has occurred, it probably wasn't intentional on THQ's part. Condit clearly carries the offending tattoo with him at all times and displays it publicly during non-digital martial arts competitions. The larger problem is that unless Condit had some kind of license agreement with Escobedo, many displays of the tattoo fall into a legal grey area. Condit's digital incorporation into UFC Undisputed 3 just complicates an already tricky issue.

This isn't the first time that the unauthorized copying of body art prompted a lawsuit either. Last year, Mike Tyson's tattoo artist sued Warner Bros for displaying Tyson's iconic tattoo on Ed Helm's face in The Hangover 2. Considering the number of tattoo-bearing actors and celebrities in the world today, it's unlikely this lawsuitwill be the last time that the issue goes to court.