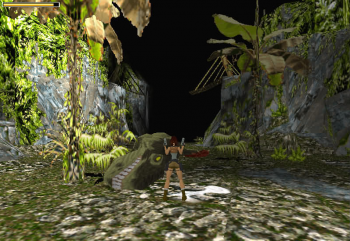 If you have fond memories of Lara Croft's back catalogue, best take yourself over to Steam and see the delights Square Enix has put on offer. Every title from the original Tomb Raider to Tomb Raider: Chronicles (V) is out now, for about $10 apiece.

"The flood of nostalgia that flows from the series' expansive history has been missing," Square Enix said in its announcement. "But that's about to change ..." The only title missing at time of writing is Tomb Raider: Angel of Darkness, and that's not Square Enix's doing. It doesn't know why Angel of Darkness isn't showing up on the list, but it's checking into the problem and hopes to have it resolved soon.

No doubt Square Enix is hoping all this nostalgia will lead to pre-orders for its latest Tomb Raider, due March 2013. Fair play to them for taking this step; there's a lot of fans out there who want to relive the series' glory days and, at $10 per, it's hard to say no to Lara.