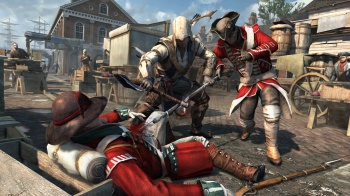 The follow-up to Assassin's Creed III could be out as soon as next year.

Ubisoft followed Assassin's Creed II with two immediate sequels, so it's not really surprising that the publisher is considering the same course of action for Assassin's Creed III. If a survey sent out by Ubisoft is any indication, the next Assassin's Creed title could be out as early as next year. The questionnaire, which aims to gauge gamers' interest in a variety of gameplay aspects that might show up in the next game in the series, also asks whether players would like to see a cooperative mode incorporated into the campaign. While there's no guarantee that Ubisoft would add co-op play even if the survey indicates overwhelming interest from gamers, it appears that they're at least considering the option.

In addition to questioning gamers about whether they want to see more of Connor or Desmond, the survey asks "If it was to become available next year, how likely are you to purchase the next Assassin's Creed game?" Considering Brotherhood was released about a year after Assassin's Creed II, it wouldn't be unexpected to see a new game continuing Connor's story by the end of 2013. What would be a little stranger, however, is if that follow-up had a co-op mode during the campaign, as hinted by this survey option: "Possibility to have a friend join the game in order to help me at any time during the solo mode." Survey-takers can respond that this feature is a "must-have," simply "nice to have," or that they're "not interested."

The survey also gauged gamers' reactions to other prominent titles, like Uncharted 3. A survey certainly isn't an announcement or confirmation of anything, but it's interesting to think that the next Assassin's Creed could get new features based on feedback from the general gaming public. A cool drop-in/drop-out co-op mode could be kind of neat; one that forces me to go through the game with a dopey AI partner when I don't have a friend around, not so much.