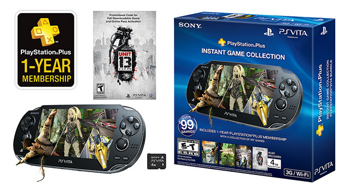 To promote the release of PlayStation Plus on the Vita (and hopefully generate some sales for the languishing handheld), Sony is offering a new bundle starting next week. For $299, you can pick up a 3G/Wi-Fi model, one year of PlayStation Plus, a voucher for Unit 13, and a 4GB memory card. As Sony brags on the PlayStation Blog, that's a savings of "over $99."

Of course, that figure doesn't include all of the free and discounted Vita games available for Playstation Plus, which launched on the handheld last week. Considering the service lets users download games like Wipeout 2048 and Gravity Rush for free, that's a pretty good incentive to pick up this bundle. Unfortunately, you won't be able to fit too many of those games on the laughable 4GB memory card.

The overpriced proprietary memory cards have been one of the biggest complaints about the Vita since its launch earlier this year. While this bundle has a lot to offer, it ignores the fact that anyone who buys it will probably still have to pick up a bigger memory card, which can add up to another $100 to the total. That said, it's still a pretty good deal if you were hoping to pick up a Vita this holiday season. You can find it in stores next week.