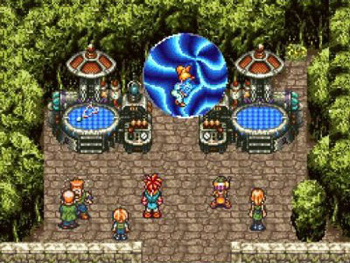 Taking place in 2,500,000 BC, Turtles in Time is the first title in a game timeline spanning billions of years.

Attempting to put video games from the same series in chronological order is nothing new. Fans have argued over the order of Legend of Zelda and Castlevania games for years, after all. But what if all games were on a single timeline--then what would the order be? That's what Alex Jaffe wants to determine with his video game chronology project, a work in progress that currently places over 1,000 games on a timeline starting in 2,500,000,000 BC with TMNT: Turtles in Time.

In a timespan of billions of years, the project places many prominent (and some lesser known) games. As you might expect, Chrono Trigger is near the top, going as far back as the year 65,000,000 BC. Day of the Tentacle's time-traveling exploits place it between Castlevania: Dracula X and Mary Shelley's Frankenstein in 1793, while the Myst games pretty much dominated the early 1800s.

Moving into the distant future, there's Ecco the Dolphin: Defender of the Future in 2900, the Xenosaga games from 7268 to 7269, and EVE Online taking place in 23347. The games furthest into the future? The Warhammer 40,000 titles, which share the year with... Space Hulk.

There are many, many more games than the few I've named here, and presumably even more will be added in the future. In fact, you can email Alex with suggestions, so if you feel like anything is missing, be sure to let him know.