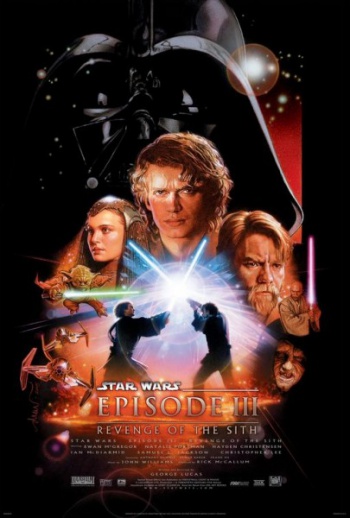 According to Camille Paglia, Revenge of the Sith is the best thing anyone has ever made in thirty years.

Art is by necessity an incredibly subjective medium. Two people can watch the same movie or read the same book and enjoy the work (or despise it) very differently. Trouble is, this is the internet, where movies like the Star Wars prequels are uniformly drawn and quartered thanks to high expectations, uninspired characters, and those damn midi-chlorians. We're slowly accepting the idea that maybe the prequels aren't as bad as we remember. But when an art critic calls Revenge of the Sith the greatest work of art our generation has ever produced, that's a much harder pill to swallow. Yet it's exactly what Camille Paglia has argued in a book on art history titled Glittering Images.

"Yes, the long finale of Revenge of the Sith has more inherent artistic value, emotional power, and global impact than anything by the artists you name," Paglia says in an interview for Vice. "It's because the art world has flat-lined and become an echo chamber of received opinion and toxic over-praise. It's like the emperor's new clothes-people are too intimidated to admit what they secretly think or what they might think with their blinders off."

I'm not entirely sure if that statement is meant to elevate Revenge of the Sith or bring low contemporary art, but it's pretty clear Paglia greatly respects Lucas's work. Each chapter of Glittering Images highlights a seminal work of art from human history, and Paglia chose Episode III's climatic lightsaber duel to represent contemporary filmmaking. "I had considered using Japanese anime for the digital art chapter of the book," she says in the same interview, "but it lacked the overwhelming operatic power and yes, seriousness of Lucas' Revenge of the Sith."

Paglia is already a controversial figure in the art community thanks to statements such as these. In the past, she's argued that literally every work of Western art and culture contains sexual meanings, and that The Real Housewives of New Jersey surpasses The Sopranos in terms of artistic quality. "The Sopranos was porn for the genteel Manhattan upper-middle-class, gazing uncomprehending across the river at the bridge-and-tunnel crowd," Paglia says. "I've been working for nearly 30 years in Philadelphia, which shares a proletarian ethnic Italian culture with New Jersey. The Real Housewives of New Jersey really captures it. I could never watch The Sopranos for more than two minutes because it was so distorted with condescending, ham-handed fakery."

While I personally believe that Revenge of the Sith was the strongest of the prequels, I'd be hard pressed to say it stands above every other work of art made in the past three decades. Paglia is still certainly entitled to her opinion, but it won't surprise me much if the rest of geekdom joins together to express its contrary belief. Here's an idea: in the interest of generating discussion, let's just forgo the usual raging Amazon-bomb routine and instead suggest alternatives. What do you think the greatest work of art produced in our generation is?

The answer, by the way, is obviously Indiana Jones and the Kingdom of the Crystal Skull.