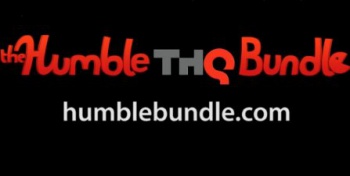 The top contributor to the Humble THQ Bundle is THQ President Jason Rubin with $1,050.

A few feathers were ruffled yesterday over the fact that the latest Humble Bundle contained not indie games, but seven titles (and five soundtracks) from struggling publisher THQ. Whether or not you have a problem with the non-indie THQ Bundle, it didn't stop hundreds of thousands of gamers from spending a few bucks (or much more) on the games; in less than 24 hours, nearly 400,000 people have contributed to the latest bundle, bringing its total to over $2,245,000 and counting.

Interestingly, the top contributor to the Humble Bundle is THQ President Jason Rubin, who spent $1,050 and donated the entire cost to charity. The average purchase is listed at $5.69 right now, but with the money and number of buyers steadily increasing, that's likely to change.

About twelve days and eight hours remain for the Humble THQ Bundle as of this writing, so you've got over a week to decide if your desire for good games at a low price (Saints Row: The Third alone would be worth it) trumps your annoyance over the lack of indie cred. And however you decide to split your money, it either goes to a publisher that could really use it or charity, so it seems like a no-brainer. Well, unless you don't have a Windows PC or Steam, in which case you won't be able to play any of these games.

Source: The Humble Bundle via Polygon