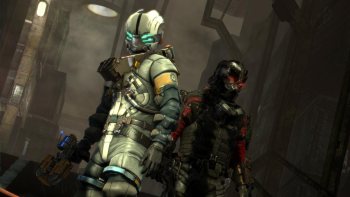 Putting down a preorder for Dead Space 3 will net you one of two bonus pieces of heavy-hitting hardware.

The Dead Space franchise is no longer about surviving the Necromorph infestation, it's about pounding it into goo in a variety of creative, gut-splattering ways. You may now commence the inevitable arguing over whether or not that's been the case all along, but either way, fans who preorder Dead Space 3 from either GameStop or Amazon will have one more slicing-and-dicing option to added to their arsenals.

A GameStop preorder will bring with it the EG-900 SMG, a compact Earthgov submachine gun sporting an internal hyper-accelerator that gives it a punch beyond its size. Taking your business to Amazon will get you a Tesla Enervator, which delivers a precision blast from an overdriven focus coil that causes "instantaneous electrocution and molecular destabilization." Both bonus weapons come in addition to the "Limited Edition" preorder content available from all retailers, which includes the "First Contact" and "Witness the Truth" bundles.

No, they're not the most impressive preorder bonuses ever, and it's a shame that everyone is going to have to buy two copies of the game just to get both, but if you were going to preorder it anyway, it's better than nothing, right? Dead Space 3 comes out on February 5, 2013, for the XBox 360, PlayStation 3 and PC.