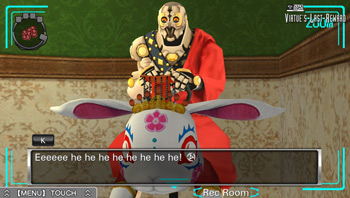 Fans may have to wait a while for a conclusion to Zero Escape's labyrinthine story.

Director, Kotaro Uchokoshi, has confirmed that another Zero Escape title is in the works, but admits that fans will have to "wait a while" to see the third installment in the visual novel/puzzle series.

Much to the delight/dismay of mystery fans, Zero Escape: Virtue's Last Reward answered very few of the questions posed in the original 999: Nine Persons, Nine Hours, Nine Doors. It not only failed to tie up loose ends from the first game, but added a giant, multi-story tapestry's worth of its own. I can't give too much away for fear of the dreaded spoilers, but let's just say there was a flow chart involved and I still ended up scratching my head at the game's ultimate conclusion.

Uchokoshi was answering fan questions on Twitter earlier today and confirmed that Phi, Junpei and Luna will appear in the game. No word on which consoles will play host to the new title, though hopefully another Vita release is worth the effort.

Our own Susan Arendt gave 999 and Zero Escape: Virtue's Last Reward four and three-and-a-half stars respectively. Personally, while I think 999's conclusion stands as one of the smartest in gaming history, Zero Escape's ending left me cold thanks to a series of bizarre, logic-defying twists and a cliffhanger the size of the moon. I feel a lot better about it knowing a third game is definitely on the way, however.