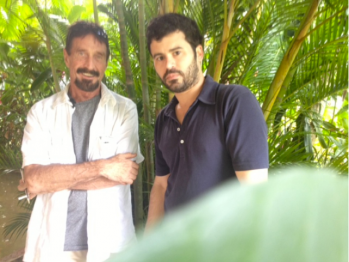 John McAfee, founder of McAfee Anti Virus and would-be hallucinogenic bath salts manufacturer, has fled Belize for sanctuary in Guatemala. The Belize authorities consider McAfee a person of interest in the killing of American expatriate Gregory Faull. McAfee claims it's all part of a government conspiracy, and that the powers that be in Belize want to kill him; in response, Belize prime minister Dean Barrow described McAfee as "bonkers".

McAfee's location was blown by his latest confidants, journalists from Vice magazine who posted a picture of themselves with McAfee in Guatemala. Regrettably the journalists failed to scrub embedded location data from the iPhone snapshot when they uploaded it, enabling alert Twitter user Simple Nomad to work out where they were when the shot was taken.

McAfee briefly tried to pretend that the gaffe was all part of his cunning plan to keep his true location hidden by spreading inaccurate information, but that explanation soon fell apart.

"I apologize for all of the misdirections over the past few days," said McAfee in a blog post, adding "I am in Guatemala and will be meeting with Guatemalan officials this morning." He has since hired a lawyer, and presumably will be preparing to defend himself against whatever charges the Belize government intends to throw at him.

UPDATE: Guatemalan Interior Minister Mauricio Lopez Bonilla has announced that his government intends to boot McAfee out of Guatemala.

"He entered the country illegally and we are going to seek his expulsion for this crime," said the Interior Minister. McAfee has been taken into custody by Guatemalan police and a member of Interpol.

Though McAfee's lawyer seeks an injunction, the Guatemalan authorities have announced that, if all goes according to plan, McAfee will be back in Belize by Thursday.