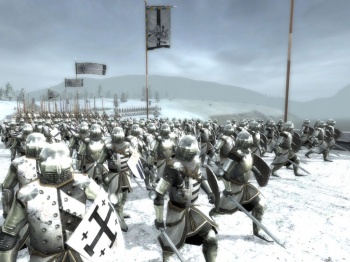 Only the fantasy Warhammer, not the space orks version, has gone to Creative Assembly.

Creative Assembly, makers of the Total War RTS series, has bagged the rights to fantasy Chaos-versus-suicidal-dwarves setting Warhammer. Creative Assembly and Sega have joined forces to work with Games Workshop in bringing its blood-and-thunder style to gamers everywhere.

"We'll be doing the Warhammer universe justice in a way that has never been attempted before," said Tim Heaton of Creative, going on to add that the developer will deliver "a Warhammer experience that videogamers will absolutely love." This is a multi-title deal so, while no actual games have been announced, you can take solace in the fact that it will be games and not game. As to when, sometime after 2013 is the most anyone was prepared to say.

"We have enormous respect for SEGA and Creative Assembly," said Jon Gillard of Games Workshop, "and have felt for a long time that the combination of the enormously rich setting of the Warhammer world, and their stunning development talent is a match with huge potential."

So, a match made in heaven then, but if you were wondering whether this meant big changes for the space orks, the answer is no. The Warhammer 40K science fiction variant of the franchise is still firmly within THQ's grasp.