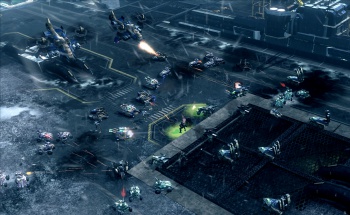 Earlier this week End of Nations developer Petroglyph Games suffered significant layoffs, and among those who lost their jobs was the game's writer and designer, Adam Stevens. Petroglyph has now lost the property altogether, and development of End of Nations is now with Trion Worlds.

"To give you a little sneak peek into what we are working on," said Erik, "some of the changes you'll notice will include improvements that ease the learning curve for new players, a revamped UI system, advancements in player strategy, and most importantly a more polished overall game."

UPDATE: In an official statement, Petroglyph has confirmed that it is no longer working on End of Nations. It has also confirmed that the layoffs previously reported did take place, but that the actual number was 19 and not 30 members of staff.

"The team at Petroglyph is very excited about End of Nations, a title which earned more than 50 nominations and awards while in development, and looks forward to its upcoming release," said Petroglyph.