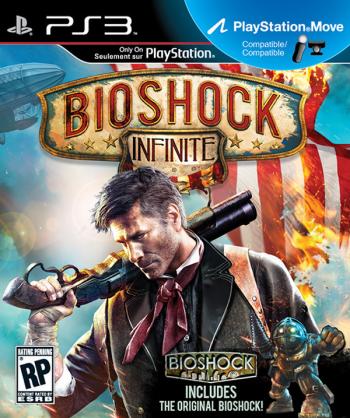 BioShock Infinite's generic cover is meant to appeal to the "uninformed."

Earlier this week, 2K Games revealed BioShock Infinite's cover, and art-lovers the world over gasped in mildly-overblown horror. Gone are the iconic Big Daddy and Little Sister. In their place is a rather generic white gentlemen posing for what appears to be the cover of Stubble, Guns and Random Sparks Magazine. It's not terrible artwork by any stretch of the imagination, but it does have the stench of the focus group about it. It's almost like a team of very talented artists decided to lump together as many clichés as possible to attract the dew-guzzling, frat-goblins who make up the bulk of the modern shooter audience. According to creative director, Ken Levine, that's exactly what happened.

"I wanted the uninformed, the person who doesn't read IGN... to pick up the box and say, okay, this looks kind of cool, let me turn it over. Oh, a flying city. Look at this girl, Elizabeth on the back. Look at that creature. And start to read about it, start to think about it," he explained in an interview with Wired.

"I looked at the cover art for BioShock 1, which I was heavily involved with and love, I adored," he continued. "And I tried to step back and say, if I'm just some guy, some frat guy, I love games but don't pay attention to them... if I saw the cover of that box, what would I think? And I would think, this is a game about a robot and a little girl. That's what I would think. I was trying to be honest with myself. Trust me, I was heavily involved with the creation of those characters and I love them."

Levine does have a point; Game packaging is meant to attract customers to the product, and the majority of people complaining about the box art were going to end up buying BioShock Infinite anyway. It's always disappointing to see crass commercialism triumph over Art! (capital A and exclamation mark included), but Levine argues that's the price we have to pay to get games like BioShock Infinite made in the first place.

"One, we need to be successful to make these types of games," he said, "and I think it's important, and I think the cover is a small price for the hardcore gamer to pay."

He did mention that 2K will be providing alternate covers that gamers can print off themselves. If you're a fan of beautiful cover art in general, I strongly suggest you get yourself some glossy paper and check out this NeoGaf thread.