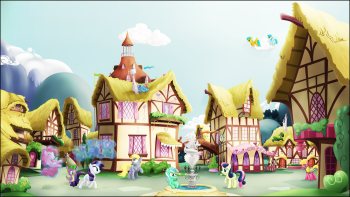 A trademark infringement claim has brought the My Little Pony MMO to a quick halt.

I'm not a Brony and I know nothing about My Little Pony except that it's about brightly-colored cartoon animals who learn important lessons about friendship and sharing and crap like that. I don't get the appeal, but it's powerful enough that the property was made into an unauthorized MMO entitled MLP: Online, the first episode of which was released just a month ago. But now it seems that the game's creators have learned another important lesson: making an MMO based on someone else's IP isn't very smart.

Shortly after the launch of the first episode, the developers received a trademark infringement complaint, which they at first assumed was a troll. After some investigation, however, they learned that the complaint was real, leading them to pull the download link and halt development. "Discussions continued through the month, but it came down to one fact: MLP: Online had come to an end," MLP: Online forum administrator ToastyJustice explained.

"Hasbro is not to be blamed here. As per U.S. Trademark law, as soon as an infringement comes to light, they are obligated to defend the trademark, or they will lose it," he continued. "They had no choice in the matter, regardless of what they thought of the project or how it benefited them."

The good news for all the Bronies out there is that roughly 75 percent of the development team is sticking together, with a new name - Starlight Studios - and a new project. "It is pony related, but otherwise we're keeping most of the details secret," ToastyJustice wrote. "It is our goal to have it completed by Bronycon 2013, though this may be ambitious."

More information about the new project are expected to be unveiled this summer and in the meantime, anyone who wants to help bring the new project to fruition can find out how to join up right here.