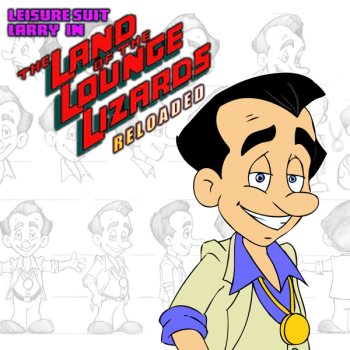 Grammy-nominated composer Austin Wintory is going for some sexy time.

The indie hit Journey is a bit of a highbrow experience. As Wikipedia puts it, "Journey was intended by the developers to evoke in the player a sense of smallness and wonder, and to forge an emotional connection between them and the anonymous players they meet along the way." A major part of the experience comes via the music, composed by Austin Wintory, which won the award for Best Original Score at the 2012 Spike Video Game Awards and, even more impressively, earned a Grammy nomination for Best Score Soundtrack for Visual Media.

But for his next act, Wintory will be doing something a little different: the Leisure Suit Larry remake that was successfully Kickstarted in May. Yes, that Leisure Suit Larry, the "sleazy piece of nonsense" that made a late-80s hit out of toilet jokes, pixelated boobs and a sexually-stunted cheeseball with a 100-percent polyester wardrobe.

Wintory himself sounded surprised by the news. "Al Lowe, the original creator, reached out to me a little while ago," he told Polygon. "The team that's remaking it, Replay Games, they had been fans of Journey. It's actually shocking that they would think to call me because they couldn't be more opposite of each other."

Replay made sure he was comfortable writing "seedy, back alley kind of stuff" before it made the offer, but Wintory said he grew up in the era of Leisure Suit Larry and that working on a game like that "was like a fantasy" for him. He added that he's actually composed "sexy music" before, although for movies, not games.

The Leisure Suit Larry in the Land of the Lounge Lizards remake is now in the Steam Greenlight mix and currently expected to come out in early 2013.