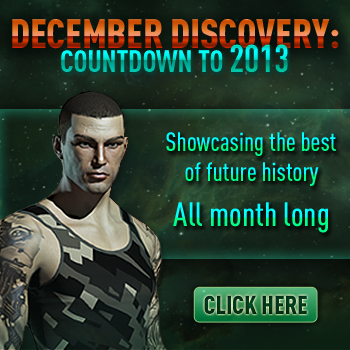 Come see what's on the horizon with our in-depth science coverage this December.

We here at The Escapist love some exciting science news. From interplanetary internet to giant black holes, we try to curate the most interesting bits of science news around at least once a week. This month, we're pleased to introduce December Discovery: Countdown to 2013, which will be showcasing some of the most intriguing science news we can find every Monday, Wednesday, and Friday for the rest of the month.

Presented by EVE Retribution, December Discovery aims to inform our readers about all of the latest scientific goings on that you may have missed, here on earth or out in the cosmos. Learn about innovations in robotics, space travel, and interplanetary colonization. If you're already on the cutting edge of science news, you can always submit your own science story here. In case you're not accustomed to keeping up with all of the news we put out, we're happy to report that we've got you covered there as well. All science news for the month of December will be conveniently aggregated on the December Discovery page.

EVE Online is a space-based MMO developed and published by Iceland's CCP Games. The sci-fi game prominently features various classes of spaceships, from diminutive frigates to enormous Titans. Space stations scattered around the universe serve as quest hubs, vendors, and hangar for your ship, while player occupations encompass everything from miner to pirate to industrialist. Retribution is the 18th expansion for EVE Online, and will feature updates to AI, UI, and improved Bounty Hunting support, in addition to a plethora of other game updates.