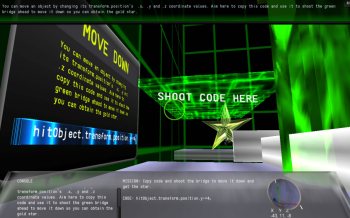 It appears that a lawsuit may be coalescing around a successful Kickstarter whose creator appears to have taken the money and run.

Code Hero first came to light back in February, when we brought your attention the Kickstarter for the game that promised to teach you how to make a game. "The idea is to suck people into the rabbit hole of an adventure, and at the other end, they ship a game," Primer Labs founder Alex Peake said, and it was an idea that resonated with gamers. The Code Hero Kickstarter ended up bringing in over $170,000, nearly double its $100,000 goal.

And then the wheels came off.

The delivery of various backer rewards, all of which were rather oddly scheduled for February 2012 - odd because the Kickstarter didn't end until February 24 - apparently never happened, and worse, Peake seems to have walked away from the project. A video of his closing remarks at the "20 Under 20 Summit" in November is floating around on YouTube but the last Kickstarter update, promising an upcoming "Alpha release," was posted on September 3 and the Primer Labs and Code Hero Twitter accounts have been silent since September 6 and prior to that hadn't posted a message since the spring.

Nervous-sounding forum posts have been going up on Kickstarter since March but they've taken on an increased urgency over the past couple of months, as backers have begun to demand refunds and dig deeper into Peake's history. Much of the concern appears to stem from Peake's post-Kickstarter admission that the money raised, despite being so far over goal, isn't enough to get the job done. "What will determine how quickly [the beta] gets ready is how quickly we can get the necessary funding and programmers to do it," he told VideogameWriters last month. "We can deliver a bunch of levels that deliver on what we promised originally, but what we have in mind is ten times more ambitious."

That statement came as a surprise to Code Hero backers, who forgivably believed that the amount Peake asked for was the amount he needed to do the job. In the final hours of the Kickstarter, Peake even claimed that if $200,000 could be raised, "We can make Code Hero an MMO multiverse in addition to single player!" And while at least one backer expressed hope that the drive for more funding means the project will eventually work out, others appear to be gearing up for ugliness.

"A modest number of Code Hero backers have reached out to me, sharing information and requesting to be kept 'in the loop' with any of our collective findings. You should know, right off the bat, that based on what we've found (and been told) - Alex Peake seems to have run out of money after spending it recklessly, and doesn't plan on continuing with this project," backer Dustin Deckard wrote. "There are well over 1000 backers out there who pledged for physical rewards. And, tragically, 6 backers who pledged at the $1k level who thought their money would be well spent on an educational tool for schools."

Deckard invited disgruntled backers to contact him at [email protected] with whatever details or information about their pledge or contact with Primer Labs they feel comfortable sharing. And although the email address is a bit provocative, he added that he's not looking to go to Defcon 1 just yet. "Please note that this is an early attempt at organizing backers of Code Hero into a group where we can better communicate," he wrote. "No legal papers have been filed at this time."

UPDATE: Alex Peake has released a statement in which he says the development of Code Hero is continuing and apologizes for the lack of updates.

"I owe you a thanks for your support and an apology for our lack of updates on all the progress we've made with your help. I started the Code Hero project to make a game that teaches people how to make games and you backed us to help make that happen. We are going to finish this game for you and everybody else in the world who wants to learn how to code," the statement says.

"We're testing a new second alpha release tomorrow to show what we've added since then and we're working towards a third more feature complete alpha that will be ready for general use as a complete learning tool," it continues. "I know the level of frustration some people have is high right now and that it is my fault for not communicating about our ongoing progress, but I want to reassure everyone who has backed us not to panic: Code Hero is not dead and we will not let our supporters and Kickstarter backers down. All our backer rewards will be delivered along with the game. It is taking longer than we hoped, but the game is becoming awesomer than we planned too."

Peake's statement can be read in full at primerlabs.com.