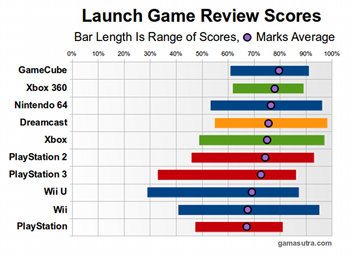 How do you decide which console has the best launch games? You could get into the fanboy arguments that have kept the console wars going for decades, or you could, you know, do some math. Gamasutra decided on the latter approach when looking back at launch window games from 1995 to the present, averaging Metacritic and Gamerankings review scores to break down how each console delivered. The results are in the graph, listed from highest average review scores to lowest; as you can see, the GameCube comes out on top, with the original PlayStation dead last.

There are some other factors to take into consideration, such as the number of games that came out close enough to the console to be considered launch games, and the amount of review information available for each console. Gamasutra's Matt Matthews stated that he was "rather liberal" in regards to the Nintendo 64, which launched with only two games; for that console, he included every N64 game that came out in 1996. And though the PlayStation is on the bottom, Matthews mentions that there wasn't a whole lot of data available for Sony's first console.

Despite ending up at opposite ends of the review score spectrum, the GameCube and PlayStation had nearly the least amount of launch games (even with all of the 1996 titles counted, Nintendo 64 had the fewest). The PlayStation 2 had the most launch games, followed by the Wii U and Wii. One could argue that the graph represents a decline in quality of Nintendo-published consoles, but that's not necessarily true. Even though the Wii is near the bottom of the score chart, it also has a wide range of scores that goes up past 90%, and the Wii U data is still being collected, since the console just launched about a month ago.

As someone who has followed the launches of nearly all of the systems present here, either professionally or as a fan, it's interesting to look back at console launches from the last 17 years and see just how those early games stack up against each other. Within the next year or so, we could be looking at this information again with launch information from the next Xbox and PlayStation consoles.