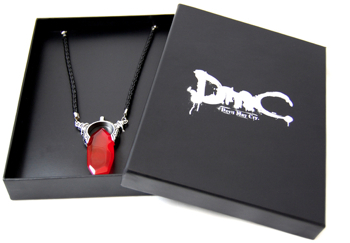 Score a bit of Dante's jewelry when purchasing from the publisher.

If you were considering picking up the newest Devil May Cry, Capcom wants to sweeten the deal - but only if you purchase the game directly from the company. If you order the PlayStation 3 or Xbox 360 version of the title from the Capcom Store you'll be treated to a replica of the crimson pendant worn by the main protagonist, for free.

Taking a page out of the book of retailers who often secure such bonuses for their own pre-order programs, it's rather interesting to see a publisher take matters into its own hands. Unfortunately, the bonus doesn't appear to be available for PC gamers, given that the game is only being offered by Capcom as a digital download on its own storefront.

DmC: Devil May Cry is scheduled to hit stores on January 15, 2013, with the PC version following 10 days later on January 25. Capcom hasn't revealed how long it will be offering the bonus, so if you have your heart set on some of Dante's bling, your best bet is to place your pre-order as soon as possible.