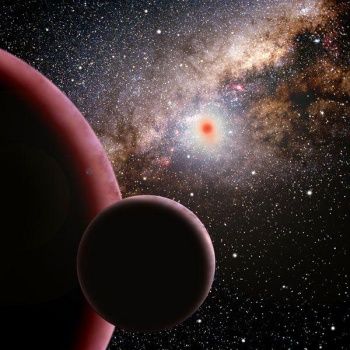 One of the closest stars to our own sun, and one of the most like it, has a planetary system.

A team of astronomers from Australia, Chile, the United Kingdom, and the United States has discovered that the star Tau Ceti hosts five planets, one of which has a mass about five times that of earth and sits in the planet's habitable zone. Tau Ceti is the closest star with similar characteristics to our own. The planet, as of yet unnamed, is the smallest planet yet found in the habitable zone of a star similar to ours. Steve Vogt, a coauthor of the study, said that "This discovery is in keeping with our emerging view that virtually every star has planets, and that the galaxy must have many such potentially habitable earth-sized planets." The planets were discovered using a new technique that combines observations from different instruments into a model, and then analyzes the model to detect signals much smaller than previously possible.

The primary author of the study, Miko Tuomi, said that "We pioneered new data modeling techniques by adding artificial signals to the data and testing our recovery of the signals with a variety of different approaches. This significantly improved our noise modeling techniques and increased our ability to find low-mass planets." The scientists then chose Tau Ceti as a benchmark, because Tau Ceti had no planets, but their increased finding power turned up planets anyway. Because Tau Ceti is so close and so bright, having knowledge of these planets means we might be able to study their atmospheres in the near future, said one study scientist.

The study was a collaboration between several international institutions as part of the Anglo-Australian planet search, and used spectrographs on telescopes in La Silla, Chile; Siding Spring, Australia; and Mauna Kea, Hawaii.