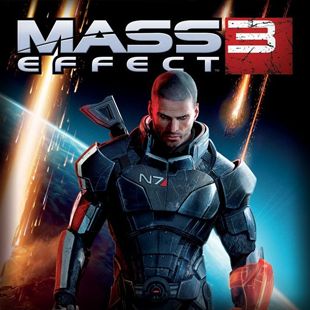 The votes for The Escapist's Game of the Year 2012 have been cast, counted, and verified.

Given the videogame lineup this year, we had a doozy of a time trying to pick out a Game of the Year, so instead we turned to you. You had a week to cast your ballot, and you did, with every entry in the list receiving at least a handful of votes (some handfuls were much smaller than others.) The race was tight, with three games vying for the highest honors, but once the dust had settled, one game stood above the rest. The winner took a hefty 13.48% of the total vote, which isn't too shabby considering the 20 titles in contention.

The official community choice for The Escapist's Game of the Year 2012 is... wait for it... Mass Effect 3 by Bioware!

The sci-fi action role-playing game caused a bit of a stir this year, but the controversial ending didn't stop it from being chosen as the best game of 2012. Perhaps it was the Extended Cut that quelled the uproar and put Mass Effect 3 on top for Game of the Year. Maybe the continued DLC support, with the most recent Omega having just come out in November, kept it fresh in the minds of gamers everywhere. Whatever the reason, we here at The Escapist are officially calling Mass Effect 3 our community-picked Game of the Year 2012.

In a delightful twist, our runner up this year was The Walking Dead, Telltale's five-part point-and-click zombie adventure game based on the world of Robert Kirkman's comic series of the same name, which took 12.54% of the total vote. Rounding out third place, but not trailing by much, is the third-person shooter Spec Ops: The Line, developed by Yager, which received 11.17%. Meanwhile, receiving the honors for least-voted-for-game is Call of Duty: Black Ops 2, which received all of 15 votes over the course of the week.

Check out our Game of the Year 2012 page for the community and, of course, our editors' picks. We've also been featuring the picks from our contributors over the last two weeks - click here for five Jimquisition videos outlining his top games of 2012 as well as the picks of Gavin Dunne from Miracle of Sound. Of course, The Escapist editors show off their Five Favorites this week too.

Many thanks to everyone who voted for Game of the Year 2012, and may 2013 be as glorious for gaming as this year has been. Happy New Year! 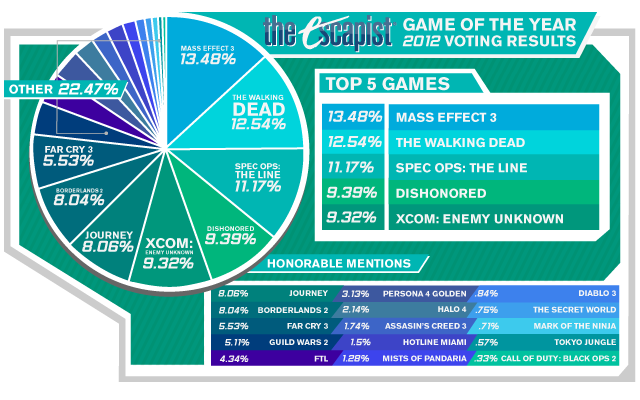