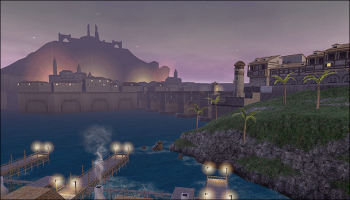 Before you all furiously click the "Comments" link so you can tell me that I don't know how to write Roman numerals, let me confirm this post's title. While Square Enix is hard at work relaunching its problematic Final Fantasy XIV, it can still show a little love for its first MMO project. Seekers of Adoulin, a new expansion for 2003's Final Fantasy XI, will launch for PC and Xbox 360 in March 2013, bringing with it new areas, new enemies, new story content, and two new jobs.

The expansion takes place, unsurprisingly, in the Sacred City of Adoulin, whose surrounding landscape includes bustling cityscapes, storied castles, and enchanting seaside locales. Players will do battle with a host of unusual creatures, ranging from the rhinocerotic Velkk to groups of beautiful but deadly butterflies known as Twitherym. Fans will probably be most excited about the two new jobs, though, which will be old hat for any Final Fantasy veteran: the Geomancer and the Rune Fencer. The former harnesses the powers of the elements while the latter prefers one-on-one dueling, although both can act in either support or offensive roles.

Current players can pick up the new content for $29.99, but newcomers might be more interested in the Ultimate Collection Seekers Edition, which includes the core game and all previous expansions in addition to Seekers of Adoulin and retails for $10 more. By the time the game launches on March 26, you may already be knee-deep in Final Fantasy XIV, but there's nothing wrong with giving the classics a little love now and then.