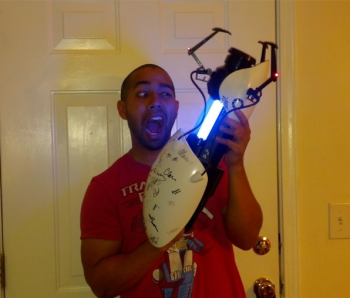 This replica Portal gun on auction is signed by the entire Valve team.

"100% of the proceeds are going to go to Child's Play Charity," promises Games Art And Music (GAAM), as it puts its replica Portal gun up on ebay. At time of writing there are five hours left to go on this auction, so if you want a shot better hurry over to ebay; preferably with more than $650 in your pocket, as that's the top bid.

The entire Valve team signed this replica, making it a unique item for any gamer's collection. The gun has been on auction before, at the GAAM charity show earlier in December, but failed to make its reserve price. This time it has until December 28th 10:37:18 PST ... tick tock, tick tock!

For those of you who love tech specs, they are as follows:

Weighted so it does not roll or require a stand to sit on a flat surface
Officially licensed Portal / Portal 2 collectible made by NECA
Dimensions: 8.5" wide (back shell), 30" long (longer with claws fully extended)
Batteries: 3 C batteries (not included)

GAAM, a Florida-based organization, is "dedicated to widening the acceptance of video games in society, and champion gaming culture," according to its website. This December's event is its first time at bat for charity; best of luck to them for the future!