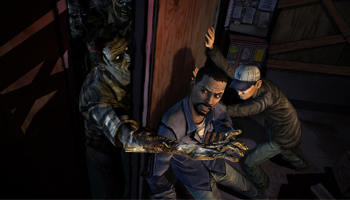 Telltale'sThe Walking Dead is undoubtedly one of the finest episodic experiences available for the Xbox 360, but you know what makes it even better? Paying less than half of the regular asking price. Microsoft is continuing its "Countdown to 2013" daily deals program by offering the first episode of the zombie adventure for free, and slashing the price of each additional episode by 50% for one day only.

The game consists of five downloadable episodes, each with its own achievements. The episodes would normally set you back 400 Microsoft Points each, or $5. Today you can download the entire series for just 800 points, or $10. If you already own one or more of the episodes, you can catch up on the ones you missed for 200 points each.

If the internet chatter hasn't already convinced you that The Walking Dead is worth dropping $10 for, our own Game of the Year voting should put your worries to rest; Telltale's take on the popular zombie franchise came in 2nd place, and was edged out by Mass Effect 3 by less than 1 percentage point.