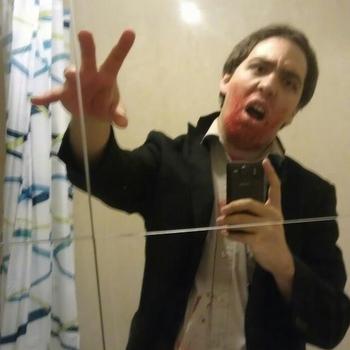 A couple of months ago, an idea was proposed on the Escapist forums that eventually came to fruition: The CommuniCast. Admittedly the idea for a community-run podcast wasn't new around the site -- there was the failed Escapist Radio project back in the summer of 2010 -- but sometimes big community ventures like this can take a few tries before they're able to really get off the ground. On Halloween day of 2012, at last the CommuniCast user group was formed. Today we have the opportunity to interview the man who started it all up, Blunderboy.

Blunderboy is someone you can see in many areas of The Escapist. He spends most of his time in the Off-topic and Gaming Discussion forums, but also dabbles in Forum Games as well as commenting on news and featured content as often as possible. He's also a member of the Brovengers, one of the most active user groups on The Escapist. Blunderboy is almost everywhere you can find people on The Escapist, and this is his Community Spotlight.

Well my official join date is April 2011, but I was lurking for at least a year or so prior. I think that counts.

What is your favourite current Escapist feature?

I do love listening to the podcast, it's making wrapping all these presents more bearable. But in terms of my absolute favourite, it's going to have to be either of MovieBob's. I'd say Big Picture just about clinches it.

What is your best memory that came from The Escapist's forums?

This is a tough one man. I've got quite a few of them. Ranging little things like finding someone else loves the same thing as you, to just joining together to have a decent discussion without it descending into childish name calling. But probably the finest memory was the inception of ComuniCast.

You started the ComuniCast. Can you explain what that is, and how it came about?

Basically, Daystar (that big time forum chap we've heard so much about) started a thread about things we would like to see on The Escapist. Fresh from listening to a Podcast or two I perked up with the suggestion of having forum members get together and do their own podcast, to discuss our own gaming habits, things that had happened on The Escapist and big topics etc.

I figured that it would be a cool idea but that really, it would be deemed too much effort and that nothing much would come of it.

But it seems that I'd under estimated the awesomeness of my fellow Escapists, who took my idea and ran with it. More than that in fact. They evolved it, adding rotating hosts to keep it fresh and get more users involved, and also creating the FailCast, which is much more free form and open in terms of topics.

My big thanks go out to all of those guys, especially Fappy and Fiz, because I did not have any internet in my flat for over a month when I came up with the idea, so everyone's help was amazing.

What is it that you do for a living? Is it something that you enjoy?

I work in a smallish office in my home town in Essex for the impressively named Institute of Mathematics and it's Applications. Before you ask, no I'm not that good at maths.

After working damn near a decade in various retail jobs, the two years I've been there are awesome. I finally get to enjoy weekend and bank holidays.

I also get to see lots of awesome places in the UK, as I get to go on conferences too. So yeah, I guess I enjoy it.

In your free time, apart from browsing The Escapist, what do you do with yourself?

Gaming is a bit of a given. Currently I'm working through Far Cry 3, inter spaced with KOTOR and Rome Total War when I need to slow it down a touch.

I've also really gotten into roleplay over the summer specifically World of Darkness and I really would encourage everyone to try it. It's a great laugh with your mates and a real blast.

Beyond that it's really just the usual I guess. Seeing my mates down the pub, films, music and trying to find a lady to share my life with. Oh my new flatmate has a piano so I'm planning to learn to play that. Or at least a few songs by my favourite singer.

I really do love Amanda Palmer, but I think that plenty of people know about her, and I can certainly see why she isn't everyone's cup of tea.

Also, more people need to be made aware of the brilliant Predator the Musical (and all the 'Arnie' musicals) and the ChristopherWalkenThroughs. You should go ahead and YouTube those.

Pets. Do you have any? If so, what are they and what are their names? If not, what would you like if you had that choice?

I don't have any pets, though my parents do sometimes tortoise sit for a friend.

If I could have my own pet? A tamed red panda would be pretty awesome.

I'd hope to be working with the same people I currently do, but in a higher position. Ideally I'd also be at least looking to buy a property and start a family. But at least half of that hinges on me finding the right woman. Ladies...

If you would like to nominate someone for an upcoming Community Spotlight, feel free to let me, Marter, know through a PM or by posting in the official thread or user group! When nominating, please tell us why this user deserves to be in the next Community Spotlight and provide links if possible.