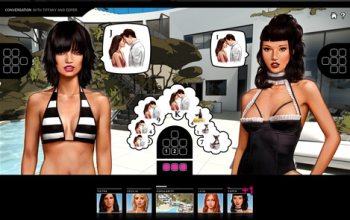 Back in September of 2012, the sexually-explicit strategy game Seduce Me was removed from Steam Greenlight for being, well, sexually explicit. Greenlight's terms of service forbids "offensive content" and while it doesn't get into what specifically qualifies as offensive, it's a fair bet that "Pietra greets you in a steamy sauna. She's unashamedly ***** ********** and over her *********" meets the criteria.

There was a not-entirely-unreasonable assumption that the Greenlight ban would likely spell the end of the project and developer No Reply Games, but nobody ever went broke selling sex and so it is that the now-completed game is up for sale via its own website. It lists for €12.99 - about 17 bucks - for the game alone, or €14.99 for the game and the four-song soundtrack.

The promotional trailer and screenshots are pretty silly, but the game clearly deserves its AO (Adults Only) ESRB tag for "strong sexual content, nudity, strong language [and] use of drugs." It didn't necessarily earn it, however; No Reply is based in The Netherlands, which doesn't actually use the ESRB rating system, and because the game isn't being sold in stores it doesn't need the rating anyway. And if you go poking through the ESRB database, you'll find that Seduce Me isn't even listed. Surely No Reply wouldn't be using the infamous AO rating for its own PR purposes - or would it?

In any event, if you want to check this thing out in all its non-Greenlighted glory, you may do so at seducemegame.com. Fair warning: There's no sexually explicit content on the site, but your mom might not appreciate you looking at it anyway.

UPDATE: No Reply has been in touch to assure us that the ESRB rating for Seduce Me is legitimate. I still can't find it on the ESRB website but a copy of the rating certificate, issued on November 23, 2012, is available in PDF format here.