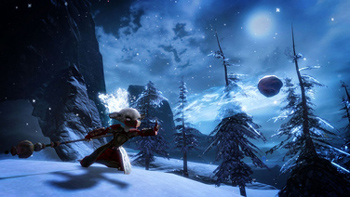 During the holidays, ArenaNet ran a charming little Christmas event called Wintersday for festively-inclined Guild Wars 2 players. Unfortunately, one of the items introduced in the event, a high-level snowflake in this case, was bugged. By combining the snowflake with a Black Lion salvage kit and some metal, unscrupulous players could generate limitless globes of ectoplasm, a highly-sought after crafting material.

The exploit was closed almost as soon as it popped up, but not before a slew of decidedly un-festive players managed to fill their virtual pockets with ill-gained loot. Those that got caught doing so are now facing a permanent ban.

The usual responses were aired, that it's ArenaNet's responsibility to fix such bugs and that players shouldn't be punished for taking advantage of game mechanics, broken or otherwise, but those claims were shot down by ArenaNet support liaison, Gaile Gray.

"Any time you take one thing and can make two, and then four, and then sixteen... ya gotta know that's just wrong. (I won't quibble on the odds, but overall, that form of doubling was not outside the realm of possibility.) And to perform that action hundreds and hundreds of times? That's called 'exploitation,' and that's against the User Agreement, the Rules of Conduct, and all that is holy," she wrote.

"Exploit closed," she added. "Worst offenders terminated. That's what has to happen to make things right for all of us."