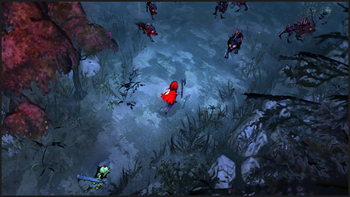 Developer Spicy Horse is out of money to finish Akaneiro: Demon Hunters, and hoping to Kickstart it to completion.

Last year was a huge one for games on Kickstarter, and it doesn't look like that's going to stop in 2013. The latest experienced developer to turn to crowd-funding is American McGee, probably best known for American McGee's Alice and its sequel, Alice: Madness Returns. Along with his studio, Spicy Horse, McGee has created a Kickstarter campaign for Akaneiro: Demon Hunters, an action RPG that's been in development for over a year. Though Akaneiro's recent closed beta was met with high praise, according to its Kickstarter page, Spicy Horse is out of money "to finish what we've started and present Akaneiro to our players in a truly final state."

Akaneiro: Demon Hunters is a "free-to-play ARPG with classic design sense" inspired by Japanese myths and Little Red Riding Hood. The screenshots on the Kickstarter page show off its watercolor art style, which was also influenced by Japanese ink and woodblock illustration. The supposedly never-ending ARPG went into closed beta in November 2012, with Spicy Horse hoping to enter open beta this month. Akaneiro's target platforms are PC and Mac, though the developer is planning to add support for iOS and Android tablets.

Spicy Horse is asking for $200,000 to complete Akaneiro, stating, "What's been achieved both artistically and mechanically is fantastic... but it's just not enough to call the game complete, to satisfy our fans or ourselves." If the Kickstarter campaign is successful, Spicy Horse will include co-op multiplayer, an equipment crafting system, and improved community support for Akaneiro, along with a bunch of smaller additions.

Spicy Horse's promise of "an ARPG that doesn't ever end" is certainly ambitious, especially considering the developer is turning to fans for money to complete the game. The Kickstarter campaign has raised nearly $4,000 with 29 days to go.