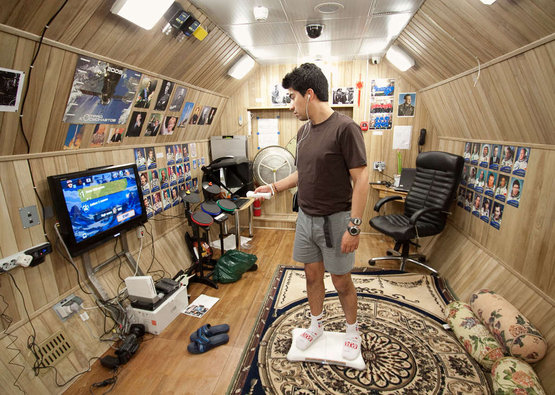 A 17-month long experiment shows that the boring parts of space travel can really make you incredibly sleepy.

Many people think that humanity's next big step towards exploring the galaxy is sending a manned mission to Mars. But let's face it: Mars isn't exactly down the street, and it would take months for astronauts to reach the Red Planet in the first place. So to study what the effects of long-term space travel would have on a bunch of astronauts placed into a tiny confined space, six volunteers participated in the Mars500 mission, an Earth-based simulation in Moscow, Russia that sent them on a fake mission to Mars - and lasted over 520 days.

The experiment itself started way back in June 2010 and concluded in November 2011, but a recently published study of the experiment details how after living in a windowless "spaceship" for almost a year and a half with a severe lack of natural light and a monotonous daily routine, all six volunteers lost much of their motivation and energy. The report summarized that the volunteers suffered from hypokinesis, which is a fancy way of saying they ended up moving less and less during the course of the experiment. As the days wore on, the astronauts spent more of their time awake engaging in "restful activities", such as reading, watching movies or playing videogames than anything more productive. French flight engineer Romain Charles noted that as the days went on, it was harder for him to focus on more intellectually challenging tasks like brushing up on his Russian, and he felt more comfortable passing the time playing Counter-Strike instead.

The crew's wristwatches, which came equipped with light sensors, showed that as they became more and more lethargic, the crew actually began to avoid parts of their "ship" that had more lighting, and a few members developed severe sleeping problems. One astronaut was observed as being practically sleep-deprived the entire mission, and another appeared to be stuck on a 25-hour sleep cycle that often left him napping while everyone else was up and about. The crew didn't even really become as active and energetic as they were at the start of the experiment until its last few weeks when their isolation from the rest of the world was coming to an end.

While napping more than usual may not seem like it'd be a big deal here on Earth, it could prove to be hazardous during a long-term space mission, since astronauts most often need to be ready to act at all times in case of an emergency. Anyone planning to launch a mission to Mars - even if it's one way - would definitely have to plan for ways to keep their space-borne crew awake, active and moving during the whole ordeal, just in case they arrive at Mars and feel like watching a movie rather than exploring a whole other planet.