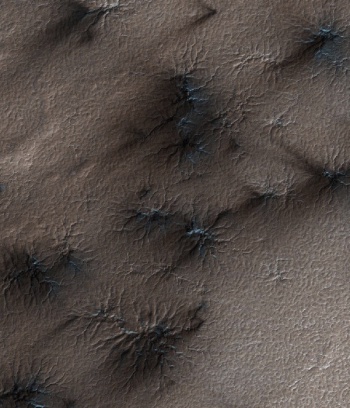 Citizen scientists will be the first people to see much of Mars' southern pole.

A group of scientists studying the weather of Mars are turning to the public to provide processing power on a project that's beyond the reach of current computing. Identifying 'fans' and 'blotches' on the Martian surface is best done by human eyes, and the group of scientists is too small to go through the hundreds of thousands of images alone. Additionally, the 'fans' and 'blotches' are hard for computer analysis to identify. Taking an average of the area which volunteers identify as a fan or blotch will produce a reliable approximate measurement of the features - and allow the scientists to get on with their real work of identifying weather patterns. As a small bonus, the volunteers may well be the first human beings to see many of the areas of Mars photographed. The fans and blotches are, scientists think, products of the way in which carbon dioxide ice freezes and sublimates on Mars' south pole - spouting gas and dust into the atmosphere that trails with the wind, allowing scientists to track the direction of their spread and thereby track wind patterns. The photographs were taken from the HiRISE camera on the Mars Reconnaissance Orbiter.

Scientists believe that in the Martian winter a layer of carbon dioxide ice freezes over the pole region. Over the course of the winter, the carbon dioxide ice - commonly called dry ice - turns to translucent slabs. When spring comes, sunlight penetrates the layer of CO2 ice and warms the ground. Once the ground is warm, the lowest layer of ice sublimates directly from solid to gas. As the gas builds up, the ice cracks and the gas bursts forth like a geyser, bringing with it dust from the surface. The surface dust is blown downwind, and the scientists can track the way the wind was blowing at the time from how the dust is distributed and how far.

At the time of publication, 15,543 citizen scientists had already classified 547,858 images. You can help out right now by going to Planet Four.