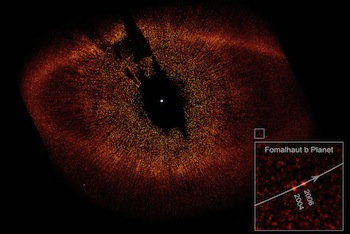 As noted by famed country rock stars/amateur astronomers The Eagles, there are indeed stars in the southern sky. One of the brightest ones among them is a celestial body known as Fomalhaut which, when viewed through the Hubble telescope, has a spectacular debris field that looks remarkably like the Eye of Sauron. Back in 2008, scientists identified an odd body orbiting around the system. Dubbed Fomalhaut B, it has long been speculated that this mote in Sauron's Eye is a planet, but it's formation and orbit have always been in question. After years of study and debate, new calculations have revealed that Fomalhaut B is most likely a "rogue planet".

Fomalhaut B was initially discovered in two Hubble photos from 2004 and 2006. Enough could be determined from those two data points to realize that something was going on, but not much else. Since the device on the Hubble that took those pictures malfunctioned in 2007, debate remained inconclusive. More recent evidence uncovered last year showed that Fomalhaut B was indeed a planet, but one with an odd, zombie-like orbit.

With this new data, the original discovery team ran calculations, predicting possible orbits, with surprising results. Fomalhaut B seems to move on an inclined angle relative to the "eye", meaning that it goes above and below the debris field, but never actually touches it. For a better explanation, watch the NASA video simulation. This comet-like orbit places it within the rogue planet category, meaning that it's a free-floating planet that might have been caught in the star's gravity field.

Fomalhaut B was one of the first planets to be observed outside of our own solar system. While we have many theories on how other systems might behave, we've had very few chances to actually observe them in action. This new evidence shows that alien solar systems might be wilder than our sol-grown dreams could ever imagine.