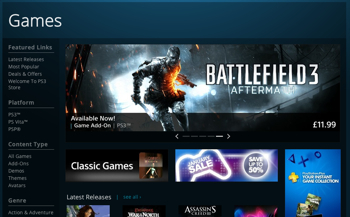 You'll soon be able to purchase PSN content via the web.

Sony will finally introduce a web-based version of the PSN store to gamers in the U.S. this month, bringing the states up to par with the U.K., which has had the option available for some time now. The site will allow purchases of PSN content for the PlayStation 3 and Vita, as well as offer auto-download options to your console.

Currently, PSN devotees in the U.S. are forced to purchase content via their game consoles, rather than browse the available content on the web. Microsoft has offered a web version of its Xbox 360 game content for years, and it's a bit of a head-scratcher that Sony waited this long to introduce a similar service.

Gamers in the states can hop onto the U.K. version of the web store right now and get a feeling for the new site. The content is structured in a very straightforward manner, offering the ability to sort based on console, download type, release date, and other criteria. You can also browse upcoming releases if you're curious about soon-to-be-released DLC or new titles.