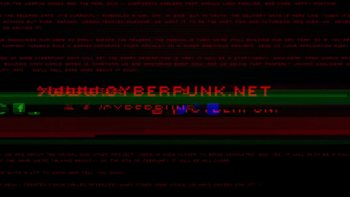 The sharp eyes at Reddit have discovered a hidden message in the Cyberpunk 2077 trailer.

Did you see yesterday's Cyberpunk 2077 trailer? If not, I encourage you to check it out. It's a straight-up cinematic teaser, no gameplay or anything like that, but it's pretty fantastic; there aren't too many things that can wind me up like slo-mo dystopian violence set to a great song. So sexy.

Anyway, it turns out that there's more to it than meets the eye, unless you happen to possess the super-sight of a Reddit who noticed a flash of text near the end of the trailer - the 2:14 mark, to be precise - and decided to investigate. He found that it wasn't just a spot of fake cyber-noise but an actual message talking about the game, and about another game as well.

"We are about to reveal our other project, which is much closer to being completed and yes, it will also be a fully open-world game with an intense story," the message says. "You can probably guess the game we're talking about - on the 5th of February it will all be clear."

The Witcher 3, anyone? Given that The Witcher series is the only thing CD Projekt Red has developed prior to Cyberpunk 2077, it's the only option that makes sense. We won't know for sure for another three weeks, but it's good enough for me - I am Officially Excited.