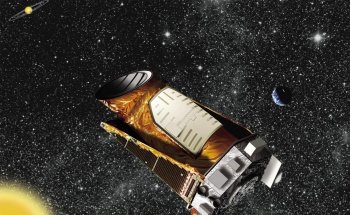 The moons of gas giants orbiting other stars may fall within the habitable zone for human life.

Most exoplanet study so far has focused on solid worlds, those worlds most earth like that orbit their stars in the habitable zone. Two scientists, Rory Barnes and Rene Heller, recently released a statement saying that it's very possible - likely even - that the uninhabitable gas giants which orbit other stars may host habitable moons. The gas giants themselves may not even have a surface or be composed of breathable material, though they orbit in the habitable zone where liquid water can form, but the moons orbiting them could have life or be suitable for people. "There is a habitable zone for exomoons, it's just a little different than the habitable zone for exoplanets," said Barnes. To consider the exact habitability of an exomoon, the scientists observed both that many moons are tidally locked and that most moons have two sources of light which are subject to dramatic changes. Moons which orbit too close to their planet would experience a runaway greenhouse effect, boiling off any liquid surface water.

"An observer standing on the surface of such an exomoon would experience day and night in a totally different way than we do on Earth," said Heller, "For instance, stellar eclipses could lead to sudden total darkness at noon." Tidally locked exomoons, like Earth's own moon, would also have one hemisphere which never faces the planet - keeping the habitable surface lower than earth's, since this side would never receive light reflecting from the planet below.

Currently, no habitable exomoons are known. It's likely that telescopes like NASA's Kepler could detect them as they traverse across their planet, causing noticeable patterns in the brightness detected over time. Barnes and Heller's findings will be in the January issue of the journal Astrobiology.