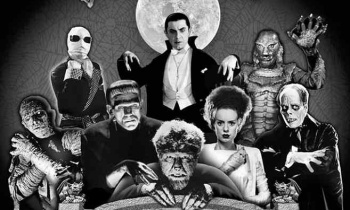 Dr. Frankenstein and Dorian Grey will team-up for a Showtime period drama in 19th Century London.

When last year's Skyfall became a hugely successful smash-hit, screenwriter John Logan found himself in a prime position to cherry-pick future projects. Logan has already signed on for another two James Bond films, but Showtime recently revealed that he'll also be reuniting with Skyfall director Sam Mendes to produce a new televised period drama. Don't expect a variation of Downton Abbey from Logan and Mendes however; the upcoming Penny Dreadful will instead feature an ensemble cast pulled from Victorian-era monster literature, including Van Helsing, Dorian Grey, and Dr. Frankenstein.

"[Logan] has been obsessed with monsters in literature since childhood," said Showtime entertainment president David Nevins. "It's a show he's always wanted to do ... It's very realistic, it's very grounded; the characters are are in very human form in turn of the century London."

Penny Dreadful is described as a psychosexual period drama that brings characters from multiple 19th century monster stories into a shared universe. The show's plot itself remains a mystery, but Showtime has confirmed that characters from Bram Stroker's Dracula and Mary Shelley's Frankenstein are among the cast of characters. There's even a possibility that historical figures like Jack the Ripper will make appearances as well.

Penny Dreadful won't be the first Victorian literature crossover out there (League of Extraordinary Gentlemen did the same thing on a bigger scale), but it is rare to see the concept rendered as an ongoing television series. Logan appears to have a very particular vision in mind, as he will be writing each episode of Dreadful's already-greenlit first season. Production begins in the second half of 2013, at which point we'll get a chance to see what Logan and Mendes have in mind for monsters, hunters, and mad scientists alike.

Five Actors Who Should Be the Universal Monsters Firefilm 4 Comments