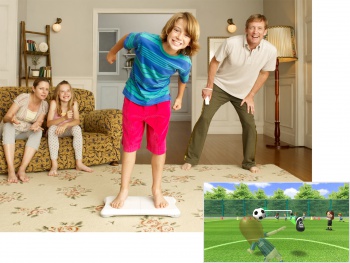 Now that violent games are once again becoming the subject of scurrilous media witch hunts, it's nice to see the occasional study which doesn't try to paint the entire hobby as a breeding ground for potential psychopaths. You don't murder anything in Nintendo's Wii Fit, except maybe body fat, or, if you look like I do, dignity.

While the actual fitness benefits of Wii Fit are still a matter of debate, the game might have other uses. A pilot study shared by London's Goldsmiths College suggests the title's balance games can help improve motor skills and raise the spirits of kids with Development Coordinator Disorder and other coordination-impairments.

In the study, a group of children with various coordination issues were split into two groups. One group used Wii Fit for 10 minutes, three times a week, while the second took part in their regular "Jump Ahead" sessions.

The study found that children who took part in the Wii Fit sessions were not only more likely to make significant progress in terms of motor proficiency; their emotional well-being and perception of their own mobility improved as well.

"The results provide interesting points warranting further discussion, particularly in view of the fact that many children have access to the Nintendo Wii Fit and may be using this system at home with minimal supervision," said project lead, Professor Elisabeth Hill. "This simple, popular intervention represents a plausible method to support children's motor and psychosocial development."