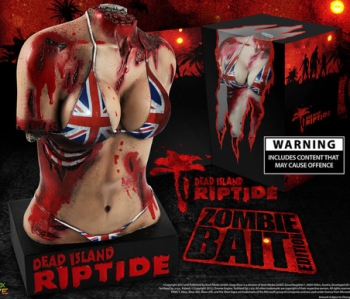 The publisher says it "sincerely regrets" the decision to include a dismembered female torso with the European collectors edition of Dead Island: Riptide.

The European collectors edition of Dead Island: Riptide revealed earlier today doesn't just push the boundaries of bad taste, it hacks its arms, legs and head off, clads it in a skimpy Union Jack bikini and then stuffs what's left over into the box as a limited edition statue. Reaction to the butchered female figurine, despite the best hopes of Deep Silver Sales and Marketing Director Paul Nicholls, was about what you'd expect: outrage, fast and furious and from every direction.

In response, Deep Silver has issued an apology on Twitter.

We deeply apologize for any offense caused by the Dead Island Riptide "Zombie Bait Edition," the collector's edition announced for Europe and Australia. Like many gaming companies, Deep Silver has many offices in different countries, which is why sometimes different versions of Collector's Editions come into being for North America, Europe, Australia, and Asia.

For the limited run of the Zombie Bait Edition for Europe and Australia, a decision was made to include a gruesome statue of a zombie torso, which was cut up like many of our fans had done to the undead enemies in the original Dead Island.

We sincerely regret this choice. We are collecting feedback continuously from the Dead Island community, as well as the international gaming community at large, for ongoing internal meetings with Deep Silver's entire international team today. For now, we want to reiterate to the community, fans and industry how deeply sorry we are, and that we are committed to making sure this will never happen again.

It's worth noting that Deep Silver did not state whether or not the statue, or the whole collectors edition, would be scrapped. We'll update when we find out more.