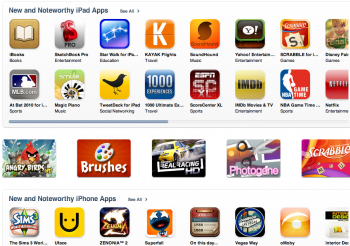 Apple's new guidelines provide an interesting look at what it does and does not want to see on the App Store.

Terms of service, EULAs and the like are typically packed with dense legalese that makes them utterly boring and impenetrable. Apple's new guidelines for app developers, on the other hand, are far more casual and accessible, laying out in clear terms not just what the company will and will not allow, but also why.

"We have lots of kids downloading lots of apps, and parental controls don't work unless the parents set them up (many don't). So know that we're keeping an eye out for the kids," the document says at one point. It also warns that there's not a lot of interest in more fart apps, and that anything appearing to have been hastily thrown together will likely be rejected. "We have lots of serious developers who don't want their quality Apps to be surrounded by amateur hour," it adds.

But it also betrays a certain dismissive attitude toward videogames, reflected in the recent decision to reject Endgame: Syria, a strategy app based on the Syrian civil war. "We view Apps different than books or songs, which we do not curate. If you want to criticize a religion, write a book. If you want to describe sex, write a book or a song, or create a medical app," the guidelines state. "It can get complicated, but we have decided to not allow certain kinds of content in the App Store."

"We will reject Apps for any content or behavior that we believe is over the line. What line, you ask? Well, as a Supreme Court Justice once said, 'I'll know it when I see it.' And we think that you will also know it when you cross it," it continues. "If your app is rejected, we have a Review Board that you can appeal to. If you run to the press and trash us, it never helps."

It's a bit of a disappointing approach, since we all like to think that videogames are capable of handling tough topics at least as well as movies, television or even books, but the sheer volume of apps on the App Store mandates a certain amount of flexibility in the approval process. Even so, Endgame: Syria Lead Designer Tomas Rawlings said that content is what counts, and that "the form of the media should be irrelevant."

"Games, films, apps, comics, music, and books should all be held to the same standard," he told GamesBeat. "To suggest that there is an invisible line that says it's OK to say something in a book but not in a game? That feels wrong to me."

But Edmund McMillen, designer of The Binding of Isaac, said the problem isn't what Apple said so much as how it went about saying it. "The way it is written is obviously bad and upsetting in many ways because on a surface level, most will view them as saying a video game can't express what a song or book can and [that they] shouldn't,"he said. "But I really just think it's a misguided way of saying [not to] submit games that are controversial and might upset people."