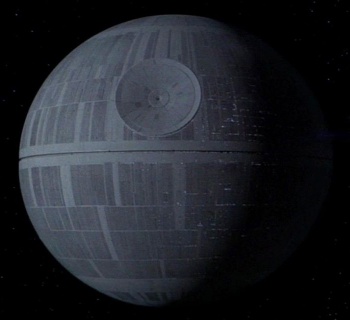 Refusal to construct a Death Star amounts to cowardice, says the Empire.

Millions of voices cried out and were suddenly silenced last week when the U.S. government put the kibosh on the petition for a real-life, working Death Star. While denizens of the United States were no doubt disappointed that their nation would not receive the protection of a moon-sized killing ball, not everyone felt so dejected. The Galactic Empire's public relations arm stepped in and penned a smugly superior press release, suggesting that the people of Earth were too primitive for such dangerous technology, and too short-sighted to see its financial benefits.

"It is doubtless that such a technological terror in the hands of so primitive a world would be used to upset the peace and sanctity of the citizens of the Galactic Empire," says Wilhuff Tarkin, an Imperial governor. "Such destructive power can only be wielded to protect and defend by so enlightened a leader as Emperor Palpatine." The press release describes Earth itself as "aggressive" and its people as "bellicose," perhaps believing that a Death Star in the hands of such a race could constitute a palpable threat to the orderly Empire.

Even so, the Galactic Empire Public Relations organization has harsh words for the White House's response, calling it an act of "obvious cowardice." Admiral Conan Motti of the Imperial Starfleet notes, "The costs of construction they cited were ridiculously overestimated." The initial petition cited the Death Star's cost at an affordable $850,000,000,000,000,000, although Motti also points out that Earth lacks the breadth and sophistication of Imperial shipbuilding techniques. The admiral urges loyal Imperial citizens to disregard any propaganda from Earth suggesting that the Death Star might have an easily exploitable weakness. "Any attacks made upon such a station - should one ever be built - would be a useless gesture."

At this time, President Obama has no plans to meet with Emperor Palpatine to discuss the issue. The people of Earth should probably be relieved that they are - so far - beneath the contempt of the mighty Galactic Empire. Just in case, though, remember these magic words: The Rebel base is on Dantooine.