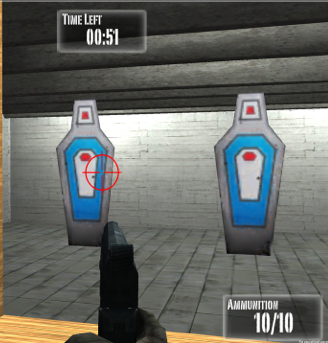 NRA: The Practice Range has been deemed inappropriate for 4-year-olds.

Last week, MEDL Mobile released NRA: Practice Range, a virtual shooting range app for iOS. The (and I'm being very generous here) "game" sparked controversy, coming in the midst of a National Rifle Association campaign against "violent videogames" conducted as part of the traditional games of pass the political parcel that follow any national tragedy. The "parcel," in this case, happens to be partial responsibility for the senseless murder of 20 children and 7 adults in Newtown, Connecticut.

The outrage at the game was largely unwarranted. The NRA is specifically campaigning against "violent" games, and while NRA: Practice Range is many things, most of them bad, it isn't really violent unless you're concerned for the welfare of cardboard targets. What did concern some critics, however, was the game's age rating. The app, which features virtual target and skeet shooting as well as safety and gun-handling tips, was originally billed as suitable for kids aged 4 and up.

Apple apparently disagrees. After public condemnation of the title from the likes of New York Mayor, Michael Bloomberg, and Newtown Police Commission member, Joel Faxon, Apple has changed the game's rating to ages 12 and up.

Despite being derided as political side-stepping by swathes of the media, the NRA's attempt at shifting the blame (warranted or not) for the tragedy onto films and games has been met with enthusiasm in some circles. Several communities have started "buyback" programs, offering vouchers and coupons for local businesses in exchange for violent games. The news media's attempt to latch on to the controversy led to a rather hilarious confrontation between violent film virtuoso, Quentin Tarantino, and British journalist, Krishnan Guru-Murthy.