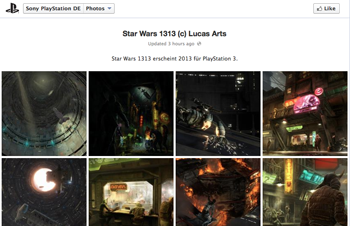 After being unveiled in June 2012, Star Wars 1313 was met with giddy excitement from fans, and the potentially M-rated Star Wars game was received positively at E3. With audio and visual quality "well beyond anything that LucasArts has ever offered," some theorized that Star Wars 1313 would be released on the next-gen successors to the PS3 and Xbox 360, which haven't been officially announced but are rumored to be released in late 2013. According to the PlayStation Germany Facebook page, however, Star Wars 1313 is coming this year--and it's coming to the PlayStation 3.

Technically, the Facebook page states "Star Wars 1313 erscheint 2013 für PlayStation 3," which Google translates into "Star Wars 1313 appears 2013 for PlayStation 3." The post appeared about four hours ago, and accompanied a photo gallery of nearly three dozen screenshots. Officially, Star Wars 1313 doesn't have a release date, or even a release window; it was in its early stages when it was shown off at E3 last year.

Sony has yet to comment on the post, but it's still up on what Google Translate calls the "official German PlayStation fan page." This is far from a confirmation of anything; it's entirely possible that this was a typo of some sort, or an announcement that went up earlier than planned. We'll let you know if Sony clarifies the post.

Update: In a response to Kotaku, a LucasArts rep stated that it was "an inaccurate post," and they have not confirmed any platforms or release date info for Star Wars 1313. The Facebook page also responded to say it wasn't confirming anything, and the post was pulled.