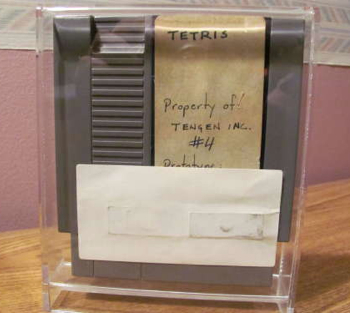 If you have the cash, now's your chance to snag one of the rarest NES games around.

If you're a lover of rare games, you're probably already familiar with Tengen's version of Tetris for the Nintendo Entertainment System. The retail version of the title is exceedingly rare on its own, but an an even scarcer early prototype version of the title is now up for auction, and it's poised to fetch a rather lofty price. At the time of this writing, the current bid is $1,000, with over three days of bidding left.

These days, the Tetris franchise isn't exactly a hot property, but things were different in the late 1980s. At that time, the game was at the center of a number of heated legal battles between several companies and individuals. During this time, several versions of the game were produced for various platforms, including Tengen's iteration for the NES.

Nintendo eventually sued Tengen for the rights to the game and won, with the judge ordering Tengen to destroy all copies of the title in existence. Unfortunately, Tengen had already released the game a number of weeks before the judgement, and it was impossible to recall them all.

As far as this prototype goes, the unnamed seller claims that it was originally sent to the videogame magazine EGM over 23 years ago, directly from Tengen. The cartridge features a hand-written label, with tape and glue abound, though it still apparently boots up and plays just fine. Of course, such aesthetic niggles aren't of much concern to hardcore collectors, and it appears as though this ultra-rare relic is going to break the bank.