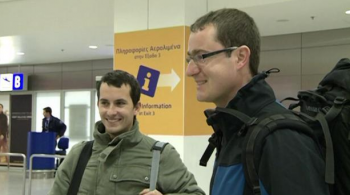 Ivan Buchta and Martin Pezlar get a rapturous reception at the airport as they fly in from Greece.

Ivan Buchta and Martin Pezlar, the two Bohemia Interactive developers the Greek government accused of espionage, have returned home after posting bail. They were greeted by crowds of family and well-wishers at the airport as they arrived.

"They're home! And smiling!" Dean 'Rocket' Hall Tweeted at the scene. Several videos documenting the event have been posted at helpivanmartin.org, but English translations are not available at time of writing.

Both developers seemed to be in good spirits, after their 129 day ordeal. "We can't complain," said Buchta, adding that they had been treated fairly in prison. Pezlar was happy to be in the Czech Republic again, and wanted to spend time with his family, finding out what had been going on at home while he was away.

There's still no concrete word as to what will happen next to the Bohemia pair. Having posted their €5,000 ($6,600) bail, they were free to go home, but Greece, which put a fair amount of effort into catching them, has yet to publicly announce its next course of action.