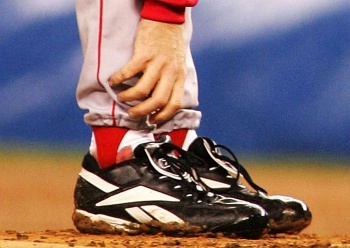 A relic from Curt Schilling's World Series days may cover some of the 38 Studios fallout.

Curt Schilling, famous Red-Sox-pitcher-turned-studio-head, was worried that he might have to sell some of his most meaningful baseball memorabilia in order to pay for the 38 Studios debacle. Unfortunately for him (but fortunately for some high-roller baseball collectors), he was right. Next month, some of Schilling's most valuable treasures will get auctioned off for five- and six-figure sums, including his famous bloody sock that won the Red Sox a world series.

Schilling - and his blood-soaked sock - gained widespread acclaim during the World Series in 2004. Following a catastrophic performance by the Yankees in the American League Championship Series, Schilling's Boston team advanced to the World Series and won it for the first time in 86 years. This particular sock accompanied Schilling to Game 2, and auctioneers expect it to fetch $100,000 or more. Among other rarities, Schilling will also sell iconic Yankee Lou Gehrig's cap and jersey, which should also rake in similar amounts of dough.

As profitable as Schilling's personal stash may prove, it may not cover all of the costs associated with the breakup of 38 Studios. The former pitcher claims to have fronted $50 million for his Amalur projects, and the state of Rhode Island is hounding Schilling in a legal battle.

While it would be easy enough to chalk this one up to delayed aftereffects of the Curse of the Bambino, it's hard not to feel at least a little sympathy for Schilling. He invested a great personal fortune in a project that blew up in his face and left scores of people unemployed. The auction, he says, is part of "having to pay for your mistakes." When the event takes place on February 23, baseball fans, gamers, and Rhode Island lawyers everywhere will see if it's payment enough.