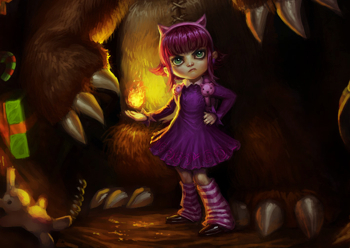 Childish behavior is met with a timely ban for two LoL players.

Following in the footsteps of Christian Rivera, aka "IWillDominate," who was banned from competition last month due to harassing behavior, two additional League of Legends competitors have been blacklisted from the game for the next year. Both Damien "Linak" Lorthios and Ilyas "enVision" Hartsema will spend the next twelve months watching League of Legends tournaments rather than showcasing their own skills.

The rulings were revealed on the official LoL forums, along with with details of why the suspensions were put in place. According to the posting, both Harsema and Lorthios engaged in verbal abuse during competitive play, tallying more conduct reports than should be humanly possible. Hartsema was reported in 29% of his total matches, which is six times as much as the average European LoL player. Lorthios, while not quite as deplorable, was still reprimanded for 20% of his matches.

One of Hartsema's accounts managed to rack up 436 conduct reports in just 135 matches, and his current harassment score puts him in the top 0.06% of all EU players. Keep in mind, this is a guy who makes money from playing the game.

The banning of Hartsema and Lorthios is good news for the eSports community, but it does put their respective teams in a tough spot. The League of Legends Championship Series season three qualifying round is set to kick off in just a few days, so some fast and furious replacements are likely in order.

Source: League of Legends via Massively