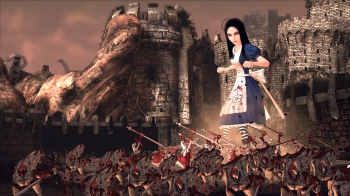 The Alice dev claims that big publishers' ads are in a "race to the bottom.

In spite of pretty good reviews, Alice: Madness Returns did not sell a whole lot of copies. Popular developer American McGee, who is currently heading up a team in China, recently participated in an AMA on Reddit, and gave a potential reason why. The marketing department at Electronic Arts, McGee believes, tried to "trick" consumers into buying the game and tapped into entirely the wrong market. The trailers, which should have presented a dark, weird, whimsical tale, instead embraced blood and violence, driving away potential players.

McGee brings up EA marketing in relation to Shy the Sun, a creative communications organization that developed the Alice: Madness Returns trailers. "[EA marketing told] STS from the start that ALL creative direction and final say would come from them, not from us," explains McGee. Under EA's direction, Shy the Sun created trailers that were bloodier and gorier than the average content in the game. "That was a calculated disconnect created by EA. They wanted to 'trick' gamers into believing A:MR was a hard-core horror title, even though we refused to develop it in that tone."

According to McGee, EA wanted hardcore horror fans' money more than it wanted their satisfaction. As long as the game sold, the department was not overly concerned with its market perception. However, McGee believes that this is what kneecapped the game's sales, since it alienated a potentially much bigger audience. "[These trailers drove] away more casual customers, like female gamers, who might be turned off by really dark trailers," he says. The game was not exactly directed towards a casual audience, but the developer argues that presenting a strong female lead coupled with a lighter tone would have made the game a bigger success.

If McGee is to be believed, this was not an isolated incident, nor is he particularly optimistic about the future of marketing videogames. "It's all a part of the race to the bottom EA, Activision and the other big pubs are engaged in. Expect to see it get worse before it gets better."