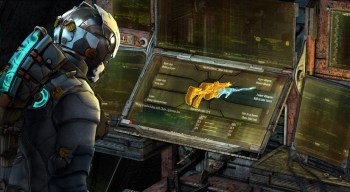 Dead Space 3 players who don't want to waste time scrounging for resources will be able to finance their weapon crafting needs with cold, hard cash.

Weapon crafting promises to be a big giggle in Dead Space 3, but you won't be able to spin an intergalactic laser-uzi out of thin air. These things cost money, you know; or more specifically, resources, the scrap and junk and bric-a-brac crapola you can scavenge on your travels and then slap together into new and interesting ways to vivisect slimy alien horrors. Can't be bothered? Then it really will cost money.

"You can buy resources with real money, but scavenger bots can also give you the currency that you can use on the marketplace," Dead Space 3 Associate Producer Yara Khoury told Eurogamer. "So you don't have to spend [real world] dollars."

As with most microtransaction-powered games, the in-game currency needed to buy resources will be available in different amounts for different prices, although Khoury didn't say what those prices will actually be. She did, however, note that players won't be able to just buy up all the best weapons at the start of the game and pull a one-man Wild Bunch. "There are a lot of weapon parts that are only available to buy later in the game. Unless you're playing through it again [on New Game Plus]," she said.

This actually isn't EA's first kick at the microtransaction can: Mass Effect 3 introduced a similar system with its multiplayer "reinforcement packs."