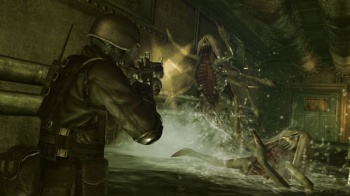 Capcom ports its most well-received Resident Evil title of 2012 to consoles.

Resident Evil 6 was met with mixed reviews upon its debut late last year, but most critics agreed that Capcom's 3DS survival horror romp, Resident Evil: Revelations, was of much higher quality. So with that in mind, the company has decided to bring the portable title to the big screen. Resident Evil: Revelations is now headed to the Xbox 360, PS3, PC and Wii U. The game will release on May 21 in the U.S., and May 24 in Europe.

The re-release will be offered as a physical disc (with a downloadable option launching same-day for PC and PS3, and arriving later for the other platforms) and as such it will carry a price of $49.99. For that fee you'll get the full Revelations experience, complete with updated graphics and lighting, a new playable character - the beloved Hunk - for the game's Raid Mode, and an additional difficulty option.

From the screenshots Capcom has released of the updated title, Revelations certainly looks the part of a full console release. Of course, screenshots can be deceiving, so we'll have to wait until we get our hands on it before officially jumping for joy.

If you're a Resident Evil fan who doesn't own a 3DS - or simply haven't gotten around to playing the pint-sized iteration of Revelations - a console version should be good news. However, those who have already played through the title once before might be a bit put off by the arguably steep cost of reentry.