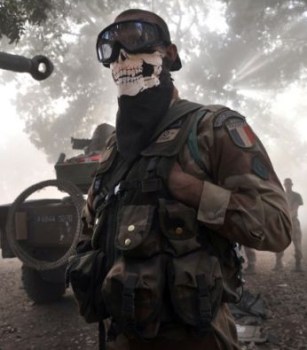 The French military says it was "unacceptable" for a soldier to wear a skull-emblazoned mask that made him look like Modern Warfare's Ghost.

An unknown French legionnaire enjoyed a brief bout of semi-fame among gamers a couple days ago thanks to a balaclava that gave him the look of a real-life Ghost, one of the central characters of the Modern Warfare franchise. It's hardly a surprising choice of couture for a relatively young man who, when you get down to it, is is paid to kill people on behalf of his government; when death is your business, a death's head motif is a natural fit.

Even so, the brass was not happy when the picture came to light, saying that the soldier's decision to wear the mask was "unacceptable."

"This image is not representative of France's action in Mali," French military spokesman Colonel Thierry Burkhard said at a news conference.

Yet the legionnaire in question wasn't trying to strike fear in the hearts of enemy combatants while in the midst of a blazing firefight; according to the man who took the photo, he was simply guarding some armored vehicles in Mali, where French forces are engaged with Islamist militants, when a helicopter came in and he put the mask on "to avoid getting a mouthful of sand."

"It was evening, and rays of sunlight were pushing through the trees and into the dust clouds. It was a lovely light. I spotted this soldier wearing a strange scarf and took the photo. At the time, nothing about the scene seemed especially unusual or shocking," photographer Issouf Sanogo explained. "The soldier wasn't posing and there was nothing staged about the image. He was just standing there, protecting his face from the dust, waiting for the chopper to land. No one tried to stop me shooting the picture."

The French army is now trying to identify the legionnaire in the photo, presumably for disciplinary purposes, but Sanogo made it clear that he has no interest in assisting with the effort and doubts that he could even if he wanted to. "The troops are working in difficult conditions. They travel thousands of kilometers by road and do what they can to entertain themselves a little," he said. "I don't know the identity of the soldier in the scarf and I'd have a hard time recognizing him even if I did see him again. I think - and I hope - that it's impossible to tell who he is. I'm not even sure if he knows what people are saying about him."